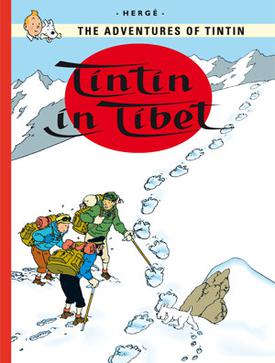 Because I am obsessive *cough,* I mean meticulous, I dug up facts about Tintin in Tibet in preparation of this post. My favorite was how prior to writing, writer and illustrator Hergé was tormented by dreams of endless white expanses. His Jungian therapist advised him to quit the Tintin comics. Hergé responded by creating Tintin in Tibet, a beautiful volume stuffed full with white snowy panoramas.

Tintin in Tibet is widely considered Hergé’s magnum opus. It is frequently featured in “Best of Tintin” lists. Hergé himself stated that Tintin in Tibet is his personal favorite. According to Wikipedia (make of my sources what you will), he said, “It is a story friendship the way people say, ‘It’s a love story.’”

It has been years since I last read Tintin in Tibet. Despite the accolades heaped upon it, Tintin in Tibet is not my favorite Tintin. That honor goes to Explorers on the Moon.

Yet I can see why critics value Tintin in Tibet so much. Sharp Tintinologists have spotted that it is the only Tintin comic book without a clear antagonist (though I would argue that The Castafiore Emerald is another). Tintin in Tibet is poignant yet subtle. The drama is never bombastic – a far cry from Hergé’s usual fare of swashbuckling adventures and international mysteries.

Believing his dream to be a vision, Tintin sets off to rescue Chang. Captain Haddock, ever crabby yet ever faithful, accompanies him. And so we have the set-up for our adventure.

Tintin in Tibet also beautifully shows the humanity of both Tintin and Captain Haddock. I loathed Tintin’s stubbornness. He was stringing people along into danger and that is not what a good person does. But his faith and his big heart are undeniable.

As a child, Captain Haddock could do no wrong in my eyes. But with this reading, I will readily admit that he could be a bit more respectful of others and their culture. But hey, Haddock’s irascibility is a great chunk of his charm!

In case you were wondering if Tintin in Tibet is too full of internal conflict and spiritual journeys to appeal to the kids, worry not! Hergé’s light comic touch is ever-present and always on point.

Why did I revisit Tintin in Tibet in the first place? Friendship, a reason befitting this comic volume’s main theme. One of my dearest friends and I are in a long-distance friendship. The Pacific Ocean separates us. In her last email, she asked me to talk more about Tintin – one of my childhood joys. No Tintinologist worth her salt can leave out Tintin in Tibet in the conversation. It is considered Hergé’s masterpiece.

I will see her in September and already I’m thinking of crafting a care package for her. I was wondering if Tintin in Tibet would be a suitable package stuffer. Reading Tintin in Tibet again today, I thought ‘yes, yes of course – in fact, she’ll love it more than I do.’ And I hope, she’ll think of me when reading her copy.

3 thoughts on “Tintin in Tibet by Hergé”