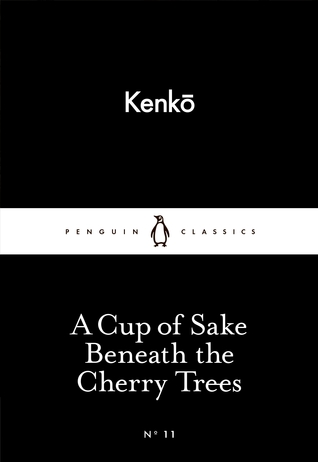 Part of the Penguin Little Black Classics line to celebrate Penguin’s 80th birthday, A Cup of Sake Beneath the Cherry Trees is a brief selection (fifty mini pages!) of the monk Yoshida Kenko’s main work: Essays in Idleness. I myself would hesitate to call the content essays. Rather, they seem more like loose diary entries where Kenko jotted down stories he had heard, opinions he had, his life philosophies, etc. There’s a certain disjointment to these vignettes, a lack of unifying theme as Kenko’s thoughts jumped from one topic to another.

Reading A Cup of Sake Beneath the Cherry Trees, I had the suspicion that Kenko never meant to have his essays read by the general public. They were written simply for his own pleasure. As such, Kenko’s writing is loose-lipped. There’s a lot of complaining here and Kenko can come across as overly judgmental and too strident. I laughed when Kenko described a beautiful hut, where:

There was not a sound except for the soft drip of water from a bamboo pipe buried deep in fallen leaves. The vase on the altar shelf with its haphazard assortment of chrysanthemums and sprigs of autumn leaves bespoke someone’s presence.

Moved, I said to myself, ‘One could live like this’ – but my mood was then somewhat spoiled by noticing at the far end of the garden a large mandarin tree, branches bowed by fruit, that was firmly protected by a stout fence. If only that tree weren’t there! I thought.

Such priggishness! There’s something wrong with a man who can’t appreciate a good mandarin tree, I tell you!

Some of Kenko’s ideas were shockingly old-fashioned. He wrote:

Needless to say, the great ruler, and even the lesser nobles who are granted attendant guards to serve them, are also thoroughly magnificent. Their children and grandchildren too are still impressive, even if they have come down in the world. As for those of lesser degree, although they may make good according to their rank, and put on airs and consider themselves special, they are really quite pathetic.

Despite all this talk of exalted seed and pathetic plebs, Kenko contradicts himself too – and displays a compassionate side. It’s not all snobbery.

But the high-born and exalted are not necessarily fine people, surely. A dull, stupid person can be born into a good house, attain high status thanks to opportunity and live in the height of luxury, while many wonderfully wise and saintly men choose to remain in lowly positions.

And there is this little bit of wisdom:

As for how to improve people’s lives, there can be no doubt that it would benefit those below if people in high positions were to cease their luxurious and wasteful ways and instead were kind and tender to the people, and encouraged agriculture. The true criminal must be defined as a man who commits a crime though he is though he is as decently fed and clothed as others.

Reading A Cup of Sake Beneath the Cherry Trees is like slowly getting to know a person. Sure, you disagree on many points. But you find common ground. And sometimes you find yourself surprised at how well your newfound acquaintance can illuminate a point.

Kenko’s essays had no unifying theme but he particularly enjoyed writing about the transience of life. What else did you expect from a medieval monk who hailed from the land of cherry blossoms? There’s really no new revelation, no epiphany here. Rather, Kenko wrote gentle reminders for us. The daily grind for wealth and more wealth is exhausting and only hurts us in the long run. Nothing is eternal in this illusory world. Live calmly and serenely. You know all of this, but it’s nice to be reminded once in a while. It feels fortuitous that I happened to pick up this little book exactly when I need to be reminded.

There was a lovely passage about the natural beauty of every month of the year in medieval Japan. It made me long for a time machine or a plane ticket for the Tanabata festival. There was also a catty and amusing passage about disgraceful drunks and delightful drunks.

A Cup of Sake Beneath the Cherry Trees isn’t memorable. But it had a calming effect throughout. Like the bookish equivalent of green tea.