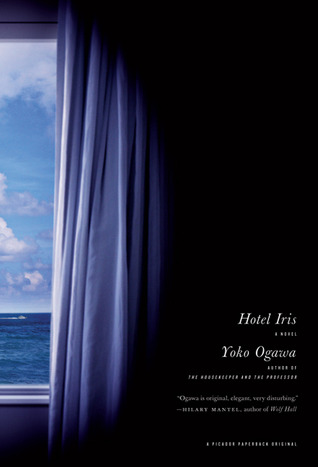 Reading Hotel Iris, I couldn’t help but think about the significance of a translator. Not just in the metaphorical sense, either. Apparently in Japan, the literal standing of a translator is higher than the norm. Several months ago, I had attended a Japan Foundation event that introduced Monkey Business, a journal that translates and collects an assortment of new Japanese writing in various genres, even manga. One of the speakers talked about Motoyuki Shibata, Japan’s most famous translator and the man who conceptualized the idea for Monkey Business. It was a surprise for me to learn that the name Motoyuki Shibata was enough to make readers buy a book. I had never heard of an instance where the translator was as influential as the writer when it came to book-buying decisions. But as the speaker emphasized, this is simply how it is in Japan.

Mari is an interesting character. As a person, she is sweet and nice. Yet her fascination with the translator, a man past middle-age, is questionable at best and obsessive at worst. When there is gossip that the translator murdered his wife in the past, Mari finds herself insulted for his sake where an ordinary person would be spooked and rattled. Right off the bat, Mari is described as a girl who finds beauty in odd places. There is a flashback of her describing the pee of her cancer-ridden grandfather as “a beautiful shade.” The translator is clearly something else she finds beauty in. Both Mari and the translator are united by loneliness and the feeling that they are unloved.

Hotel Iris has a mysterious feel to its pages that I found beautiful. Some motives and actions are never properly explained. Because Hotel Iris is told from a first-person POV, we never truly get to know the translator, we never see things from his perspective. I was left wondering whether I was simply meant to savor this little novel rather than analyze it to death. The writing is delightful. Yoko Ogawa’s prose is pristine: clear, unpretentious, elegantly simple with no excess fat. If there is one translator involved in Hotel Iris who deserves praise, it is Stephen Snyder. It is to his credit that we are able to enjoy Ogawa’s style.

However, because Ogawa left many things unsaid I was unsure whether the relationship was meant to be exploitative or a romance. Ogawa neither condemns nor endorses. My personal inclination is to be uncomfortable with the younger woman/older man trope as it easily falls into abusive territory. And there were many reasons to be uneasy. While Mari and the translator’s first sexual encounter could be interpreted as Mari having an innate understanding of the translator, it can also come across as rape. There is a lack of consent I found disturbing. Closer and closer to the end, the translator started to be controlling: he withholds information from Mari and springs surprises without her knowing, expecting her to just roll with the punches. In a way, Hotel Iris isn’t really a romance but a coming of age story. Mari is young, with little prospects and a lack of love and experience. Her involvement with the translator could be seen as an initiation into adulthood, or maybe a search for excitement in a lackluster life.

The major weakness of Hotel Iris, I thought, is its ending. I remember thinking, ‘Gosh, there’s hardly any pages left, how is Ogawa going to wrap everything up?’ Turns out, she couldn’t. The ending is really rushed, abrupt, and anticlimactic with loose threads everywhere. It would have been better to lengthen and develop the conclusion more. The ending dragged down my enjoyment of Hotel Iris, even though I started out really liking the novel for its pure, unclouded writing.

Reading Hotel Iris serves as a microcosm of my experience with Japanese fiction: beautifully written, even if I don’t always understand what’s going on. Even if Hotel Iris isn’t the best example of Japanese literature I’ve read, I’m still excited to read more Ogawa and explore more in the genre.

Those interested in the journal Monkey Business, here is their tumblr page.