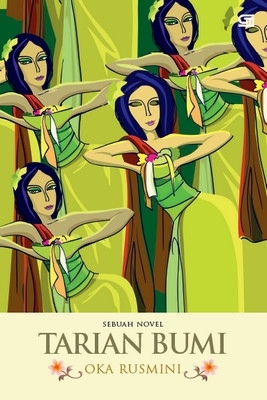 Look. Just look at this hideous cover. Ugly Indonesian book covers deserve an exclusive blog post as they are a deterrent to purchases. I almost didn’t buy Tarian Bumi because I found the cover so off-putting. There are so many beautiful Balinese art and paintings. Why use this Shutterstock image?

But I digress. On to the review.

Tarian Bumi is proudly advertised as a feminist novel. It tells the life stories of four generations of Balinese women as they navigate their complex culture, which is redolent with rigid class and caste systems. Telaga is our de jure main character, but the plot moves backwards and forwards to scenes of Telaga’s daughter, mother, and grandmother.

Now, feminist novels are my jam. Books are my one true love and I identify as a feminist. But more and more I am growing dissatisfied with the genre. Too many of them lack nuance and blame everything on men. Sadly, Tarian Bumi displays shades of this. I admit to disliking the tone: angry and histrionic. What’s funny is that not only are some of the male characters harmless at worst and quite nice at best, not all of the main female characters are likable.

The lack of likability seems to be intentional. Clan matriarch Ida Ayu Sagra Pidada is a snob, a classist who is awful to her daughter-in-law Luh Sekar simply because she is born a sudra, the caste of the commonfolk. There is a lack of empathy in Ida Ayu Sagra Pidada. She was treated poorly by her husband, but instead of sympathizing with Luh Sekar when Sekar is treated poorly by her husband, Pidada blames all of her son’s behavior on Sekar.

Luh Sekar, who started the novel a weeping damsel, became much more interesting when flashbacks told her story. She was ambitious, stubborn, practical, and determined. Neither sweet nor likable (although she does have a loving bond with her mother), she had agency and defied what arbitrary social class dictated. Or did she? Luh Sekar “defied” fate by marrying up. In doing so, she accepted arbitrary social rules and had to embrace all the complex codes and etiquette systems of the Balinese aristocracy. Gradually, these rules and etiquette systems erode upon her once-vibrant personality. The author clearly detailed the convoluted Balinese codes: because Luh Sekar is by marriage an in-between sudra and Brahmana, Sekar can no longer pay respects to her beloved mother as her status is higher, yet the pure aristocrats still lord privilege over her. Luh Sekar’s status is that of the “other.”

There are women who subvert expectations. A teacher to Telaga used perceptions of the “defiled woman” to live the way she wants when she is really a virgin. But even then her life is limited by poverty and social class. There is another woman who parallels Luh Sekar: wanting to destroy fate only to become a prostitute and a slave to capricious beauty standards. Never have I read a book that better explains the patriarchy as a system. The women in Tarian Bumi try to defy their fate but end up adhering to the system and class laws time and time again.

The main lesson this novel tries to teach is that the development of women depend on other women, not men. This is why men are practically nonexistent save as love interests and family members. As readers, we don’t get to unpack them the way we do the women. Even the kindly grandfather’s role is one note: as dispenser of sage advice. Telaga wants to defy her mother and grandmother, but she ends up being shaped by them.

Personally, I disagree. I think the development of the female mind is equally affected by both men and women. But I do recognize that Tarian Bumi is a novel of interesting ideas. And it is here that I will say that Tarian Bumi is a novel much better studied than read. How I wish this book was on the reading list of a literary theory class! The papers I could write, the ideas I could engage with. But I wasn’t terribly impressed with the style or diction. Both felt average and as a reader, I’m an easy lay for beautiful prose. I recommend this book if you are interested in feminist theory. Otherwise, Tarian Bumi might be a bit much. 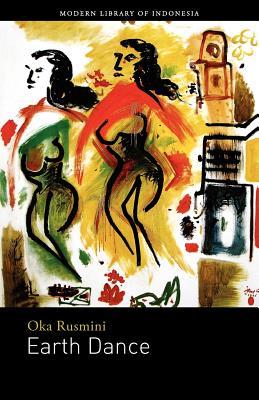 For those interested, Tarian Bumi has been translated into English as Earth Dance. I think the English cover is much prettier and more appropriate as it actually utilizes a Balinese painting as its cover. A link to the amazon page is provided here