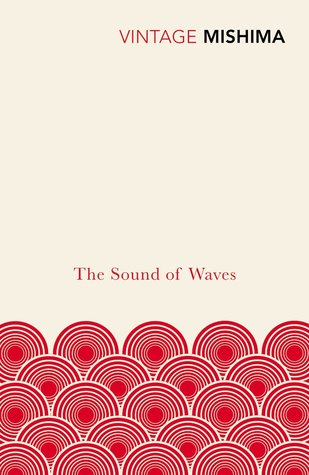 My Vintage classics edition was translated by Meredith Weatherby

The biggest surprise I had after reading The Sound of Waves was finding out that it wasn’t Yukio Mishima’s first novel. On the list of Mishima’s bloated bibliography, The Sound of Waves was around the tenth novel he wrote. Research on the man shows he had an astonishingly productive career. Combined, he wrote more than a hundred novels, short story collections, essays, and plays. He also had a, well, shall we say, colorful character. Google is your friend if you want to know more about his life and death.

My impression of The Sound of Waves being a first novel was never meant to be an insult, however. The writing never felt inexperienced; it was just that the bare bones simple plot struck me as something a new writer would try out to develop his craft and play around with style. Boy meets girl. They fall in love. Boy is poor, girl is rich. Obstacles ensue. Flip a coin and you’ll get a 50-50 chance between a happy ending and a tragic one.

The Sound of Waves is a slow read; the writing is formal and descriptive. The love story can take a back seat to the leisurely paintings of life in a remote Japanese island. Uta-jima, where the novel is set, is a tiny village untouched by modernity where everyone’s livelihood depends on the sea. The daily lives and routines of fishermen and pearl-divers are greatly detailed and the landscape of Uta-jima Island, with its every nook and cranny, is minutely imagined.

Personally, I enjoyed Mishima’s prose: gentle and pure, descriptive yet readable. The way the story is written feels like a novel-length folktale or fairy tale. Like a folktale, it does have clear morals in it. And like a folktale, I often felt detached from the characters. They didn’t feel like drawn-out, fleshed-out characters. They lack layers. Our lovers, Shinji and Hatsue, are exceedingly beautiful and pure. Our antagonists are jealous snobs.

Now I did say I was delighted by Mishima’s depiction of island life but The Sound of Waves occasionally suffers from too much padding. A few scenes I thought were unnecessary. An egregious example would be the pearl-diving women having a “whose breasts are the most beautiful?” contest. It doesn’t happen continuously though. Other scenes unrelated to the main plot were rendered with a deft touch. I particularly loved when Shinji’s brother Hiroshi went to Kyoto for a school excursion and didn’t even know how to use a folding seat at the cinema. It was a sweet portrait of innocence and a clear declaration by Mishima that Utajima-dwellers were “untainted” by the cities.

Here’s the basic verdict: The Sound of Waves is a good book, perfectly pleasant to read. If you want your books to be more than pleasant, if you can’t bother to waste time with books that aren’t less than mind-blowing, then this is probably not for you. The Sound of Waves is slow, sweet, and not particularly memorable. That’s all right, though. I didn’t read The Sound of Waves because I had the feeling it would displace my favorite books. Rather, I wanted to have a taste of Yukio Mishima’s writing before I committed to reading his magnum opus: The Sea of Fertility tetralogy. The lovely clarity of Mishima’s prose excites me for more Mishima.

8 thoughts on “The Sound of Waves by Yukio Mishima”