Read and reviewed as part of my Classics Club Challenge 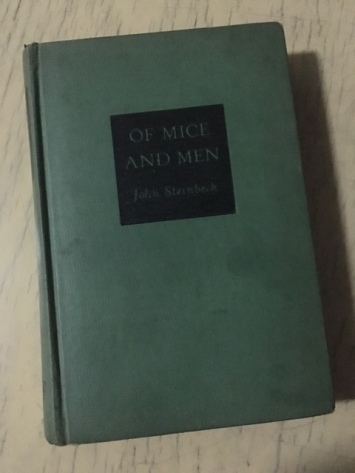 My copy of Of Mice and Men. Inherited from my grandfather and published in 1938

Isn’t it strange how the fiction we completely adore are the most elusive to review?  When you are completely absorbed in another world, a world more real than our own, who has the time to analyze themes, symbolism, motifs, and all that faff? Sometimes fiction just works, no thousand words necessary. And I say this as someone who used to spend every day analyzing themes, symbolism, and motifs.

In case you haven’t guessed, I completely adored John Steinbeck’s Of Mice and Men. I couldn’t put it down when reading. I even spent my lunch break reading. I was desperate to know what will happen to George and Lennie. What I’m having trouble with is putting into words why I loved Of Mice and Men so much.

In Of Mice and Men, we enter the lives of two drifting California laborers during the Great Depression: George and Lennie. Both men have fled their previous employer because of an incident involving Lennie. It’s easy to infer that Lennie has a mental disability and is both devoted and dependent on George, but George cares deeply for Lennie as well. They are sustained by a shared dream of owning their own piece of land.

George and Lennie quickly find new employment, where they find friends and kind souls along with the new boss’ belligerent son and his dangerous wife. Characters and events weave around each other to a climactic action, leading into tragedy.

(I will never laugh again at generic blubs. It is difficult to write the synopsis of a book without spoiling key plot points while not sounding pathetically vague, which I have failed to do. Apologies)

Part of the reason why Of Mice and Men confounded me, despite my love, was how similar I found Steinbeck and Hemingway’s themes and dominant male presence. Yet I found Hemingway cold and dead. I reviewed Hemingway’s collection Men without Women very negatively last year. Meanwhile, Steinbeck’s Of Mice and Men is heartfelt and exciting.

A dear friend and fellow Steinbeck lover suggested that Steinbeck had “sensitivity to injustice and personal emotions [and] deep commitment to realism and humanism.” I do think there’s something to her theory. Humanism and sympathy are key. There’s a tenderness to Steinbeck that Hemingway lacked. I cared for George and Lennie and Of Mice and Men’s cast. Fiction that inspires emotions just work, no thousand words necessary. Sometimes the difference between a magical author and a merely skilled author is the breath of life he gives his world and characters. I think, ultimately, that is the main difference between Steinbeck and Hemingway.

12 thoughts on “Of Mice and Men by John Steinbeck: More a Comparison than a Review”