I had thought of prefacing this post with an announcement: a new and very positive development in my life will hinder me from posting as often as I’d like. But then I had to laugh. I have always been and will continue to be a frustrating, sporadic poster. Oh well. Anyway, I’m not happy yet with how my review of Leila S. Chudori’s Pulang (Home in English translation) is coming along.

(A part of me is kicking myself for being so slow with Pulang’s review. It’s good to strike now, since Texan Deep Vellum Publishing has brought out a new cover. But I justify myself by saying that I really like Pulang and there’s a lot I want to cover in my review)

So I’ve decided to upload something more relaxed. Here’s a commentary on the two novels I’m currently reading: Fruit of the Lemon by Andrea Levy and Laskar Pelangi (The Rainbow Troops in English translation) by Andrea Hirata. A chance to overanalyze similarities between two unrelated novels? English lit graduate here, that’s my forte – yes, please.

In all seriousness, it’s not hard to spot the resemblance between the two. Both Andreas try to tackle tough topics; Levy with racism and the second generation immigrant experience, Hirata with education and social disparity in Indonesia. Neither are thin novels, but worry not about being bogged down. Stylistically, the themes are wrapped in an easy, readable package. 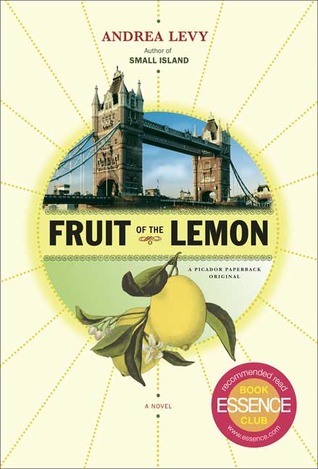 My focus right now is on Fruit of the Lemon since I’m almost at the finish line. The novel doesn’t cater to those who demand their literary fiction dense and challenging. Fruit of the Lemon is a quick & easy contemporary read, with some stock tropes. The protagonist feels like a chicklit heroine sometimes. There’s awkward humor and eccentric roommates typical of a sitcom. I’d caution you not to expect a deep, dark novel in Fruit of the Lemon.

Fruit of the Lemon focuses on Faith, a recent university graduate and daughter of two Jamaican immigrants. The first half of the novel is all about Faith’s life in England; her new job, her crazy roommates, and her family. Unlike other novels I’ve read of the immigrant experience, there’s little emphasis on the first generation’s attempt to preserve motherland culture for their family; no painstaking description of Faith’s parents preparing Jamaican dishes, no reference to an English Jamaican community, no long-winded stories about Jamaica from the parents. This is a family that doesn’t look back to their roots. Faith knows very little about Jamaica and her relatives there. In the first half, Faith’s identity is thoroughly British. Until little things and bigger events start to make her question that once-strong sense of identity. The second half of Fruit of the Lemon is set in Jamaica, where Faith learns more about her history.

Hirata needs a better editor though. He is so passionate about everything that he can spend three pages describing a plant; from its Latin terminology and species, to its elements, to its medicinal properties. Laskar Pelangi is nearly 500 pages in my Indonesian edition and it can easily be cut.

Laskar Pelangi is advertised as a novel, but everyone in Indonesia knows it’s really a thinly-veiled autobiography. The book tells anecdotes and stories from a dilapidated classroom in Belitung Island, Sumatra. The class is comprised of ten ragtag students from poor families. Laskar Pelangi does both close-ups and wide shots. We follow the kids’ adventures and stories during their school years and we get a bigger view of the gap between the rich and the poor in Belitung Island. Belitung is known for its tin (today, local government is trying to diversify their source of earnings). In the social pyramid, the majority are tin laborers and at the very top we have executives with their own gated, sheltered community, unaware of how the “others” live.

I’m nearly sure I will rate Fruit of the Lemon 3 stars on goodreads, unless something mindblowing happens in the final chapter. I have no complaints against it. The prose flows very well and the novel is well-written. But I don’t think it has that special something that elevates it to more than “a good, easy read.” Laskar Pelangi is trickier. Right now, it’s between 3.5 and 4 stars. It’s unputdownable with a conscience but has some flaws I can’t ignore. I’ll probably have a better idea when I actually finish the book.

Enjoy your weekend everyone! I hope you spend it with good companions and good books.

4 thoughts on “Current Reads: A Double Whammy of Easy-Reading Andreas”