This is not a travel blog, but let’s make an exception for this post. On March 9, areas in Indonesia experienced a total solar eclipse. My mother surprised me with a two day trip to Belitung Island in Sumatra, one of the hotspots for watching the eclipse.

(By surprise, I mean more of an ordered “I bought tickets and we’re leaving on March 8.” Is there anything I could say other than “OK?”)

A good friend asked, “What was like to experience a solar eclipse?” At the risk of sounding spiritual, I told her I felt small. The universe is so large and extraordinary and mysterious.

I have no photos of the eclipse itself since I have no proper camera for the event. There were plenty of dedicated photographers though. Some people climbed rocks and builders to achieve the perfect angle. A tourist attached three different filters to his serious camera. So I’ll bet there are excellent photos of the March 9 solar eclipse you can find online.

What I do have are photos of the beach and the ocean. In the hopes of imparting some aquatic delight towards you, here are some photos from my island hopping adventure – taken immediately post-eclipse watching.

The same beach later in the morning

The view from inside our boat

A lighthouse on Lengkuas Island, one of the smaller islands off Belitung

Rock formations off an island

I was most enchanted by the ocean’s color. It’s the Pacific Ocean, but never have I ever before seen ocean water so flawlessly turquoise. Any chance a dress could be made with the water’s color?

The boat dropped anchor in the middle of the ocean and I took a dip into the waters. What an experience! I saw coral reefs of many patterns: large and Rafflesia arnoldii-like or small and ornate. Best of all was the fish. Mostly they were small and flat; some zebra-striped, some lemon yellow, and best of all, a more rounded, longer fish of the most beautiful color. No other shade could describe it but royal blue.

(No photos for my underwater antics either. No waterproof camera. Ducks rotten tomatoes)

This is not a travel blog, so I made a literary stop at Belitung. I went to Museum Kata Andrea Hirata (literally Andrea Hirata’s Museum of Words). Andrea Hirata is an extremely famous Indonesian author, most-known for his Laskar Pelangi (Rainbow Troops in English translation) tetralogy. The first novel in the series, titled simply Laskar Pelangi, was an unprecedented blockbuster in Indonesia. Readers and non-readers bought it. Movies were made. A musical was staged. Settings in the book became tourist attractions in Belitung Island. People began to care more about children’s education in the area. It’s a term overused these days, but I wouldn’t hesitate to call the Laskar Pelangi quartet a cultural phenomenon.

Photo of the museum’s welcome board

The museum is basically a monument of Laskar Pelangi’s success. There were newspaper clippings about the books, the author, and their impact. There were posters of international book covers and a selection of Hirata’s novels in every translated edition. Not really a tourist must-see but I rather liked the building itself. The color scheme is so vivid and whimsical and childlike, which reflects Laskar Pelangi’s subject matter. If I am not mistaken, the artwork are from Hirata’s own hand – the works were signed by him.

A sign saying: Indonesia, let’s go to school! Never give up!

This is not a travel blog, so let me update you on my bookish ways. I finished Pulang (Home) by Leila S. Chudori prior to my Belitung excursion. I loved it, definitely the standout novel of the year so far to me. A gushing review will follow in a few days and for the curious an English translation has been brought out by Deep Vellum Publishing. 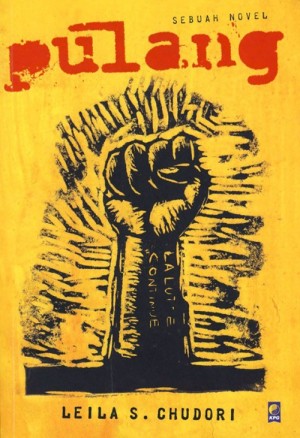 I’m currently in the middle of two novels: Fruit of the Lemon by Andrea Levy and Laskar Pelangi by Andrea Hirata. Both are quick, easy reads, it turns out. I’ll review both when I’m finished. Just call it a double Andrea book whammy!

13 thoughts on “This is Not a Travel Blog”