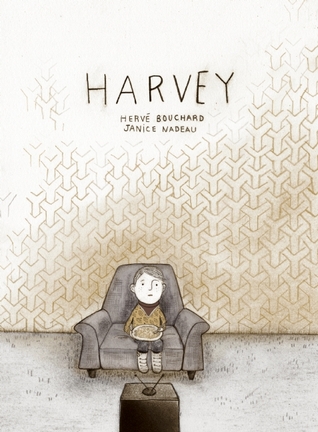 My edition of Harvey was translated from French by Helen Mixter

Someone ought to stop me from compulsively checking on Groundwood Books’ catalogue. The Canadian children’s publisher has released many beautiful picture books and graphic novels. Harvey is the second graphic novel of theirs I’ve read and the art doesn’t disappoint. The illustration style is lovely and whimsical, with a muted color scheme that echoes the story’s mood and setting. I can’t remember any bright shades anywhere in Harvey.

Harvey feels like a picture book/graphic novel hybrid. There are no speech bubbles, although dialogue exists. All the text is presented in a picture book format. And the text’s font relays a subtle sweet touch. Handwritten and stiff, it perfectly mimics a schoolboy’s best classroom writing.

The plot follows Harvey, our eponymous narrator of young grade school age. Harvey and his younger brother had only finished racing and playing in the slush of Canada’s early spring when they find out their father has died of a heart attack. Harvey deals with the boy’s life immediately prior to this sudden death and his reactions and coping approach immediately after.

Having read Groundwood’s Harvey and A Year Without Mom (reviewed here), I have a hunch that their editors love gentle, tender stories. Because A Year Without Mom is set in early 1990s Moscow, I had thought the graphic novel would impart some historical and political lessons. With Harvey, I had thought the father’s sudden death would feed a lot of drama into the story. But it is not so in both cases. Both Harvey and A Year Without Mom are about kids quietly struggling with life. Their struggles aren’t overwhelmingly bombastic. Rather, they are relatable day to day hurts and aches: problems at school, problems with friends, feeling alone and out of place and uprooted.

What I loved and related to most about Harvey is how accurately it captures a young child’s reaction to death. Little Harvey wasn’t sobbing, wasn’t distraught. In fact, his emotional reaction can feel too subdued to a reader. Little Harvey fended off the idea of death by searching for his father at home, despite seeing an ambulance take the body away. He spent the night fantasizing about a film. But gradually he grows to understand things are different now. Permanently so.

Overall, I appreciated Harvey’s art more than the story. But then, there’s not much of a story to begin with. I admired that the book feels emotionally true –especially taking into account that the story is told from a young child’s perspective. I like Harvey more than A Year Without Mom and I absolutely would love to read more of Groundwood Books’ publications.

2 thoughts on “Harvey by Herve Bouchard and Janice Nadeau”