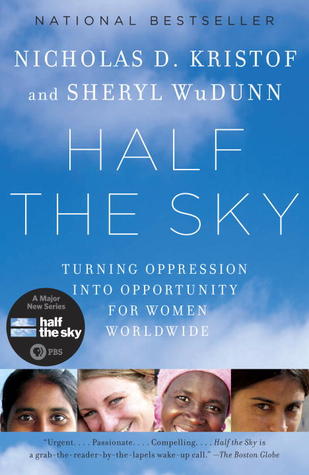 I have no idea if the fame and momentum of this book has endured, but it had its moment. Half the Sky was adapted into a PBS documentary about a couple of years ago and it has been used as a university text. That’s how I swiped this book; my baby brother was about to dump it after his uni class was over so I gladly took Half the Sky since it has always been on my radar to read someday.

Half the Sky is structured into two halves. The first half is a tableau of human rights abuses towards women; sex trafficking and prostitution, gender-based violence such as honor killings and rape as a war tool, maternal mortality, etc. The second half is a list of actions that are working now to combat these abuses: investment in education, microcredit, grassroots movements, even television programs.

If you are looking for academic rigor, you may be disappointed. The bulk of Half the Sky are personal stories; dozens and dozens of women are interviewed, their stories inked on paper. There are horror stories about women twice-and-thrice-trafficked, there are hopeful stories of how a little education can go a long way. In fact, the narrative of the entire book is set into a pattern of most horrific to most hopeful. Almost as though designed to reel you in with sensation and misery before alleviating it with hope. If that sounds emotionally manipulative, that is the point. Kristof and WuDunn are upfront about their methods. They are honest about their choice to showcase personal anecdotes. Research has shown that statistics have a numbing effect, while stories tug at the heartstrings and spur people to act. Half the Sky was never meant to be a dispassionate text; Kristof and WuDunn wants you to get up and act after finishing the last page.

Funnily enough, despite Kristof and WuDunn admitting to emotional manipulation, I found their voices to be earnest. Earnest, well-meaning, and passionate. Reading Half the Sky, I completely believed that they truly cared about their mission to help women worldwide.

I, personally, found Half the Sky to be very powerful. It broke my heart and angered me to see these women suffer such obscene injustices. The back of Half the Sky had a list of charities and organizations that Kristof and WuDunn have vetted to be least corrupt in helping women worldwide. It is a testament to the book’s power that I searched for a charity I could look into and volunteer some time to. In this respect, the book has been successful. I won’t effusively recommend Half the Sky though, because I am aware it’s not for everyone. It worked for me, but I can easily see someone different frustrated at Kristof and WuDunn’s approach.

Something else of note is that Kristof and WuDunn readily acknowledge that Half the Sky focuses its scope on the developing world, which opens them up to criticism of ignoring women’s rights issues in the first world and thinking only poor benighted third world dwellers have massive problems.

I mentioned that this is not an academic text and being a feminist myself, I knew about most of these problems already. Half the Sky is great for the uninitiated, as the book covers women’s rights issues in a readable, accessible way. Yet Kristof and WuDunn also provides surprising complexities. For example, I had not known that pimps and human traffickers dose their victims with meth to ensure addiction and a return to them if they ever manage to escape, making it exceedingly difficult and dispiriting to rehabilitate sex-trafficked people. It was heartbreaking to read these women go back to their traffickers, desperate for a hit of meth. It was also heartbreaking to read about the frustration of aid workers trying to help them. Even I, a longtime feminist found something of value from Half the Sky.

At the end of the day, helping the downtrodden, women or men, is a noble cause. And despite how Kristof and WuDunn’s approach might frustrate, even anger some, if most reactions to Half the Sky are close to mine, Kristof and WuDunn have written a useful book indeed.

3 thoughts on “Half the Sky: Turning Oppression into Opportunity for Women Worldwide by Nicholas D. Kristof and Sheryl WuDunn”