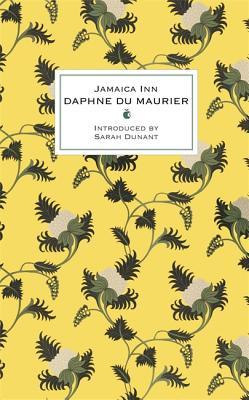 Following her mother’s dying wish, twenty-three year old Mary Yellan moves to live with her last living relative Aunt Patience at the eponymous Jamaica Inn. Jamaica Inn may as well open with “It was a dark and stormy night;” so bleak, so gloomy, so rain-and-windswept is Mary’s journey from mild and fertile Helford to the barren Bodwin moors. Not only does Mary have to deal with the desolate atmosphere, she is treated with great suspicion and disdain by anyone who learns she is heading to Jamaica Inn. No one respected ever goes to Jamaica Inn anymore, Mary is warned. Strange things happen in Jamaica Inn. Strange and terrible things. But Mary is headstrong and has a promise to fulfill, so to Jamaica Inn she goes.

When she arrives, the Aunt Patience she remembers as a bright figure; lovely and laughing, has turned drab and meek, cowed under the thumb of her husband, the nearly-seven-foot-tall Joss Merlyn. Joss is drunken, vicious, and brutal. He warns Mary to shut her eyes and ears to the happenings at Jamaica Inn. There is a locked room at the inn that Mary must never enter.

One day, a group of men described as the dregs of the countryside convene at the inn’s bar. After a few drinks, the men torment one of their own, leaving a disgusted Mary to keep to her room. It is there she sees the men’s wagons deposit heavy cargo into the inn’s locked room. As Mary’s suspicions turn to smuggling, she overhears a member of the band argue against her uncle Joss. A fight breaks out. And Mary later sneaks to the bar only to find a hangman’s noose hanging from the rafters.

As the plot thickens, two new characters enter the fray: Francis Davey, an albino monk and Jem Merlyn, a charming horse thief and Joss’ younger brother. Mary struggles to decide who to trust and against her better judgment grows attracted to Jem.

Jamaica Inn is without a doubt the most fun book I’ve read this year. It’s almost too fun to be considered a classic. I read my first du Maurier, Don’t Look Now, last year and loved it so much I proclaimed du Maurier a new favorite author of mine. Her short stories were spine-tingling, atmospheric Gothic horror and I picked up Jamaica Inn expecting more of the same. It’s not the same. It’s an entirely different beast. Jamaica Inn is still atmospheric, with its intensive descriptions of bleak landscape, but its genre is more Gothic romance and adventure yarn rather than Gothic horror. It’s a fabulous page-turner and I stormed through the novel. The tension is palpable and there were moments when my heart thumped in worry for Mary Yellan’s safety.

Jamaica Inn isn’t without its flaws. I guessed the plot twist and the conclusion deflated a little. But my biggest issue is that the characters veered a little too close to two-dimension territory. Mary, our heroine, is predictably plucky and spirited. She feels a bit clichéd. So do the monk and the horse thief. du Maurier’s greatest character creation in Jamaica Inn is probably Joss Merlyn. His presence and physical description is appropriately menacing. But the reader can easily tell that a lot of his manner is just bluster. Like most bullies, Joss is weak, really. After suffering his worst alcohol bender, courtesy of threatening Mary and Aunt Patience to hand him brandy, he whines to them, “Why did you let me drink?” Joss’ faults are always with the drinks or the Merlyn curse, never himself.

Something about Jamaica Inn promises to be a darker read than it turned out to be. The threat of rape hangs above Mary throughout the novel.  The specter of domestic abuse sticks to Aunt Patience like glue. Jamaica Inn follows genre conventions in the end. Mary is never harmed despite the dangers around her. Nothing too grisly is written. All’s well that ends well on the final page. Or is it? I simply couldn’t shake off the curious feeling that du Maurier intended Jamaica Inn to be darker than its final product, so I actually found the “happy ending” quite horrific.

Did anyone else, like me, interpret the “happy ending” of Jamaica Inn as something very dark?