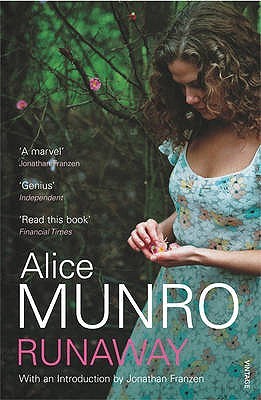 I took extensive notes whilst reading Runaway as I knew I would find it a difficult collection to describe and review. These short stories are incredibly well-written and I was often left in awe of Munro’s prowess as an author. Yet simultaneously, I was often left cold and detached. I was never emotionally involved in the characters’ travails even though I have wanted to cry and rage and whoop with joy at fiction that weren’t as magnificently-crafted as Runaway. Munro’s prose is clear-eyed and uncomplicated and she writes with a precise, surgical touch. So clear is her prose, that sometimes her writing felt dry and prosaic. Also, perfection is intimidating. Perhaps that’s why the stories felt cold.

To give a better understanding of Runaway, these are short stories that critics, lit crit professors, and writing professors would hold up as exemplary models of the genre. But for those who have never liked literary fiction, Alice Munro would not be a good gateway drug. My guess is that Runaway would be perceived as pretentious and confusing.

This is actually my second attempt at tackling Runaway (Successful this time – Hooray!). Only two weeks after Alice Munro’s Nobel win in 2013, bookstores were inundated by her back catalogue. Munro was always on my radar even if she was never on the top priority list. Those who know me would know that I am a short story acolyte so I bought Runaway knowing it was regarded as one of Munro’s best collections.

There are eight stories in Runaway and I gave up the first time around because I thought these stories were just a bit aimless, a bit pointless, and then they just ended. There were no climaxes, only an emotional flatline. The first story, which gave the collection its name, didn’t sit well with my feminist sensibilities. A woman lying about domestic abuse to get out trouble? Umm…

I’m not sure why I felt a sudden blazing desire to read Runaway again last week. But I’m glad the inspiration struck. What the heck was I smoking when I read the opener that first time? “Runaway” is a perfectly-constructed short story. For those unfamiliar with Munro’s writing, nearly all of her stories end with a twist, you never really know where the story is going. You think the story is building up to a climax, but then Munro changes directions entirely. I suppose I had thought these stories pointless because they weren’t neat. They were perfectly-constructed, yes, but the stories went in odd directions. The after-scenes don’t match the set-up.

Rather than confusing you with my explaining, I’ll give an example with “Runaway.”

There are more unexpected turns in this story up until the end. These “twists” aren’t meant to be shockers and smacks. Sometimes the plot turns feels mundane and subtle, but organic and woven to the story.

The ending to “Runaway” was mundane, but it dropped a rock in my gut this time. What I felt was an affront to feminism with the wife exaggerating both her neighbor and her husband’s actions is symbolic of the collection’s theme. Nothing is simple, nothing is clear-cut, nothing is black and white. The wife Carla isn’t a liar, exactly – there are signs that her spouse is a bad husband. And in the end, Carla actions didn’t get a pass. To appease her husband, to get him sweet again, Carla’s white lies has to progressively build and build. Their reconciliation at the end is hinted to be a temporary band-aid. Everything high must come down – everything becomes mundane all over again.

“Chance,” “Soon,” and “Silence” are based around a single main character named Juliet. A short story trilogy, I suppose. Juliet isn’t a likable character. She can be hard and cold. Yet she is strangely relatable – who hasn’t wanted to get out of a chat with a “friendly” (read: intrusive) stranger? In “Silence,” tragedy befalls Juliet late in life. I felt no sadness for Juliet’s sake as, like I said, I am not emotionally invested in these stories. But Munro really gets what life is like following a heartbreaking event. Life goes on, life always goes on – and you have to follow the current of life or else you won’t survive. Pain will dull, will be less fresh but it will always be as if there was

a murderous needle somewhere in [your] lungs, and by breathing carefully, [you] could avoid feeling it. But every once in a while [you] had to take a deep breath, and it was still there.

The fifth and sixth stories “Passion” and “Trespasses” were the ones I disliked most. They dragged on. It astounded me that a story titled “Passion” could feel so cold. I was so detached that by the time the revelation of “Trespasses” was revealed, I thought ‘Oh, so what?’ I get some of the things Munro was trying to do. I get that the title “Passion” is meant to be ironic. I get that Mr. and Mrs. Travers are meant to parallel their son Maury and his new girlfriend, our protagonist, Grace. I get that in “Trespasses,” the likable Harry is actually hypocritical. I can appreciate the themes of memory and looking back in both “Passion” and “Trespasses.” But those two stories felt pointless and here I began to wonder if my weariness was caused by a Munro deluge. Perhaps I should have spaced out the stories more. But don’t just take my word for it. Alan Hollinghurst thinks “Passion” rates “among the finest things [Munro] has done.”

The final two stories “Tricks” and “Powers” were the most readable stories in Runaway, in my opinion. “Tricks” felt hopeful and romantic. A welcome change. Even if things did not end happily, it still had a sweet note to it. “Powers” is a fabulous closer. Clocking in at 65 pages, the story utilizes Munro’s considerable powers (hahaha, I’m so funny!). The story played around with different structures, from a diary format, to third-person narration, to epistolary form, then back and forth again. Munro really nailed the voice of a young rural girl complete with a country hick and the twists felt so natural.

Ultimately, I think the main theme in Runaway is that there are no easy answers in life. A lot of the turning points in life are just chances. I don’t think we’re meant to figure out everything as our protagonists themselves are trying to figure things out themselves. People try to make sense of their lives and rarely succeed.

My favorite quote from Runaway is this:

What most people suspect is true. Such performances are full of tricks. Full of fakery, full of deception. Sometimes that’s all it is. But what people –most people- hope for is occasionally also true. They hope that it’s not all fake.

There are many references to spirituality and chances in Runaway; things rational people scoff at. Yet their impact on our lives are so much more complex than that. Sometimes Munro crushes such hopes, sometimes she writes that our hopes are true. In “Powers” she does both. Munro does an honorable job of portraying life in all of its grey complexities, in its lack of clarity. While I can’t help but wish these stories had more pep and life, I admire Munro. I get the feeling that, as a person, she is empathetic and understanding of others, since she is so well-versed in the ambiguity of life.

9 thoughts on “Runaway by Alice Munro”